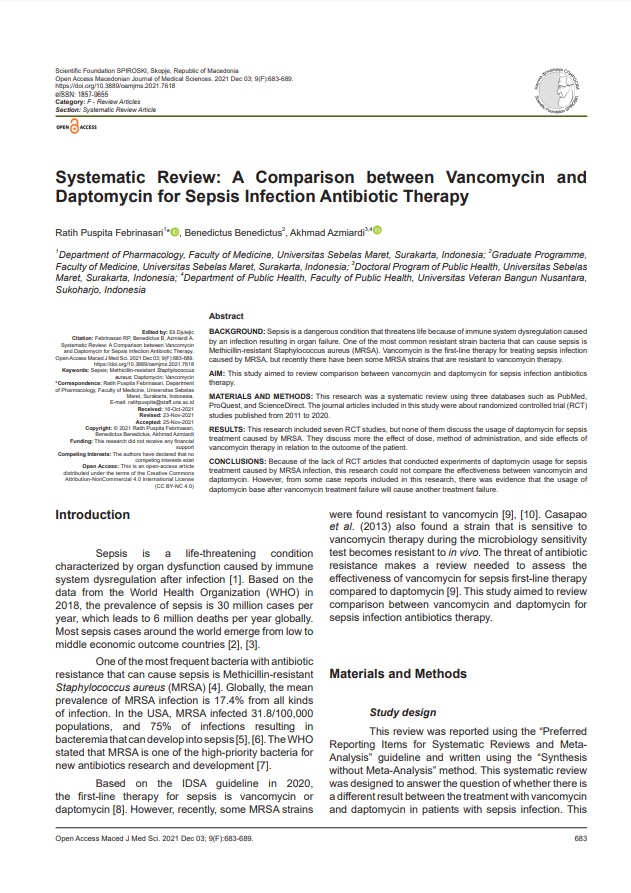 Abstract
BACKGROUND: Sepsis is a dangerous condition that threatens life because of immune system dysregulation caused
by an infection resulting in organ failure. One of the most common resistant strain bacteria that can cause sepsis is
Methicillin-resistant Staphylococcus aureus (MRSA). Vancomycin is the first-line therapy for treating sepsis infection
caused by MRSA, but recently there have been some MRSA strains that are resistant to vancomycin therapy.
AIM: This study aimed to review comparison between vancomycin and daptomycin for sepsis infection antibiotics
therapy.
MATERIALS AND METHODS: This research was a systematic review using three databases such as PubMed,
ProQuest, and ScienceDirect. The journal articles included in this study were about randomized controlled trial (RCT)
studies published from 2011 to 2020.
RESULTS: This research included seven RCT studies, but none of them discuss the usage of daptomycin for sepsis
treatment caused by MRSA. They discuss more the effect of dose, method of administration, and side effects of
vancomycin therapy in relation to the outcome of the patient.
CONCLUSIONS: Because of the lack of RCT articles that conducted experiments of daptomycin usage for sepsis
treatment caused by MRSA infection, this research could not compare the effectiveness between vancomycin and
daptomycin. However, from some case reports included in this research, there was evidence that the usage of
daptomycin base after vancomycin treatment failure will cause another treatment failure.